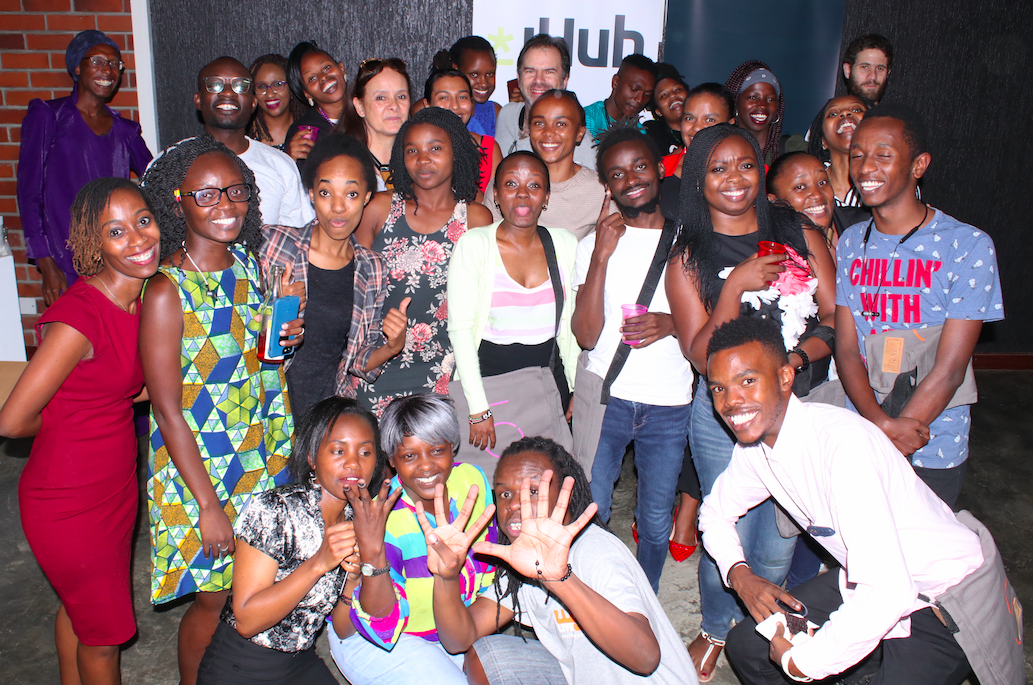 A lot has happened and having been at the iHub since inception- in 2010 as a community member and from 2012 as a staff member, I have had the privilege of having a front row seat.

We’ve had some pretty awesome leaders. Erik taught us vision, Josiah taught us structure, Kamal taught us networks and Mary taught us decisiveness.

We have had incredible board members over the years who have included. Juliana Rotich, Conrad Akunga, Rebecca Wanjiku, Riyaz Bachani, David Kobia and Bitange Ndemo.

Over the past 9 years, The iHub has been a catalyst for regional tech acceleration and a role model for tech hubs across emerging markets. To date, over 350 startups can trace their roots to the iHub, hundreds have been incubated, over 60 startups have been accelerated by the iHub, and millions have been impacted by products built by our members. Over $40m has been raised by our startups in early stage and growth financing and grants, and over 1000 direct jobs have been created by the iHub portfolio businesses.

The role of the iHub is to support innovators who aspire to create great companies harnessing opportunities in the African market. We have created an environment of trust and experimentation that facilitates the growth of innovators and their companies.  We recognise that this is only possible by collaborating and partnering with local and global stakeholders and we acknowledge that our impact is what it is because of great collaborations over time including our founding partners Ushahidi, Omidyar and Hivos and organisations like the Bill and Melinda Gates Foundation, IDRC, Rockefeller, MacArthur Foundation, USAID, DFID, OSI, Google, Microsoft, Intel, Oracle, IBM, Spider, Seacom, Safaricom, SIDA, Ford Foundation, TripleOKLaw, Mastercard Labs, Adeso and many, many others.

Our eclectic community and strategic partnerships have allowed us to bring together developers, designers, creatives, tech enthusiasts, entrepreneurs, corporates, government and startups to connect, build, and innovate. Through our convening power, garnered over 9 years, we have constantly convened communities around issues that affect societies. I am grateful to Skunkworks KE, the glorious group of rebellious Kenya techies that built a community that made up iHub’s first members. We are honoured to be a founding member of Afrilabs a network organization of 151 innovation centers across 40 African countries that puts wind in our sails!

Birthdays are always a good excuse to have a party, so we had a party last week to celebrate turning 9. We made it an exclusive community event. The iHub staff team mixed the drinks and got rave reviews from community members who opted to stick to water. As is tradition we got our birthday cake from Rinnie who makes probably the best chocolate cake in the world. We had about 6 minutes of speeches and the rest of the time was spent laughing and talking and appreciating those around us. Check out iHub at 9 in pictures.

There are several things for the iHub team, community, partners, and friends to look forward to as we settle into the second quarter of 2019.

We are constantly recruiting new members. Our new space – now 2 years old, is 25000 square feet, compared to our previous home that was just about 3500 square feet. This means we can house a lot more members at our White member community desk, Green member dedicated desks and Red member private offices. We’re also excited to introduce our virtual membership.

We recognise that lots of members of our ecosystem are out and about working with clients, forging global partnerships, setting up offices across the country and taking over the world. Our virtual membership allows members to still have the iHub as a base, take advantage of the space for meetings and workspace whenever they are in town and use the iHub as their business address. Check out the details here.

In 2019, the ecosystem can also look forward to the reintroduction of Pivot East. This is our flagship incubation program that took a two-year break. We are ecstatic to be able to run the program this year but even more than that we’re just excited to meet quality startups looking to take advantage of the robust workshops and mentoring and incubation that we have in store.

We recently announced the 2019 edition of Devcraft, which will be held on 26th and 27th September. DevCraft is our flagship developer and design conference whose main aim is to evangelise the value of modern software practices and how they contribute to the quality of products pushed out to market. The conference gives a platform for experts to show what they do. It’s less talk, more action. Devcraft is a culmination of user group meetups hosted at the iHub and you can read more about those here. If you’d like to be part of this event as a partner or speaker, please get in touch with us on devcraft@ihub.co.ke. You can also view the sponsorship packages here.

Our Women In Business program is an exciting new addition to our list of entrepreneurs programs, which include Pivot East and Traction Camp. We first announced this on Internation Women’s Day. Our Women in Business program will support women-owned and women lead businesses by providing forums, training and mentoring to address challenges affecting the growth of women’s businesses, sharing a robust curriculum to equip women with the technical skills and entrepreneurship skills necessary to run sustainable businesses. Research, evidence, and learning are crucial elements for the iHub and evidence generated through this program will be shared publicly. There are exciting new partnerships in the works for this program and we look forward to sharing the news with you!

So what are we doing in 2019? We’re building communities and supporting businesses together with our partners and ensuring that we meet the diverse needs of the Kenya tech ecosystem. We’re enjoying 9! Come impact with us!