The Future of Hubs 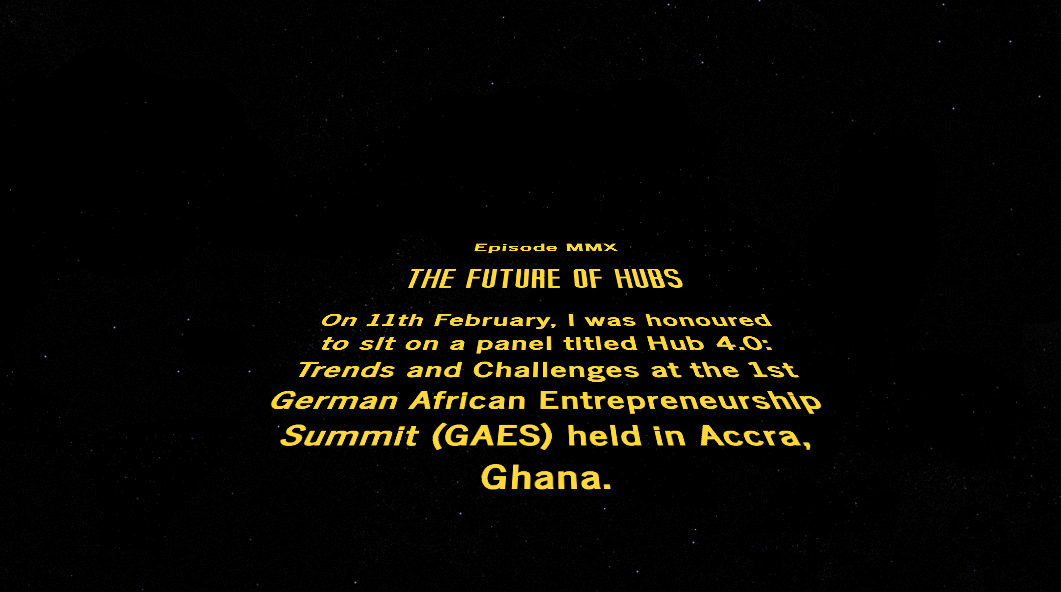 See what I did there?

GAES brought together 150 representatives of the Pan-African entrepreneurship ecosystem to learn from each other and leverage their experiences and creativity to re-evaluate and define the future of entrepreneurship in Africa.

We began with the definition of a hub in our context and debated whether or not physical spaces were critical. While operating models are different, we agreed that in our context hubs are central places or points that entrepreneurs are drawn to, to get much-needed resources to build their businesses and where the startups positively influence local economies.

On whether or not one needs a physical space to run a hub, the panel was split down the middle but once we delved into it, we agreed that what was important was to set a clear mission and if a core part of that mission relied on you having a physical location, then that was absolutely fine.

A man who calls his kinsmen to a feast does not do so to save them from starving. They all have food in their own homes. When we gather together in the moonlit village ground it is not because of the moon. Every man can see it in his own compound. We come together because it is good for kinsmen to do so.

The iHub is an open space for technologists, investors, tech companies and hackers in the area. A core part of the iHub’s mission is to build and maintain a support system for techies by regularly convening the tech community or offering the space for members of the tech community to convene gatherings to discuss issues that interest or affect them. The physical space, we’ve found, also introduces a layer of trust and credibility for the iHub and for other players who take advantage of the space to meet. Kenya’s technology innovation community would congregate in online spaces such as Skunkworks KE, the iHub was created because that community felt there was value in having a physical home. We quickly saw that exciting things happen when you bring people with interesting ideas into one space and encourage them to interact. For example, iHub’s famous pizza Friday, where a member would share the progress of their product development or marketing strategy to a friendly community invested in their success, was and still is very popular.

Programs can, however, be virtual and a lot of accelerators and business development services are. Many organisations are now also taking advantage of digital media to share educational content through videos and podcasts for example, which consumers can access in the comfort of their homes thus negating the need for physical spaces. But even these organisations at some point require space perhaps to hold open days or graduations or launches and spaces like the iHub come in handy for this.

The conversation in Ghana then shifted to whether hubs still benefitted startups and if there was a place for them in the future and we were all agreed that aside from offering programs that enable startups to grow, hubs whether or not they had physical locations, offered entrepreneurs access to invaluable hands-on mentorship and funding, and safe spaces to try and succeed or fail.

Although hubs currently serve the needs of their communities, there will be several factors to consider if we are to remain relevant in the future:

Indeed some of these markers of hubs of the future are already coming to pass in ecosystems across Africa and there is a mixture of apprehension and excitement as we position ourselves for relevance, sustainability, and impact.