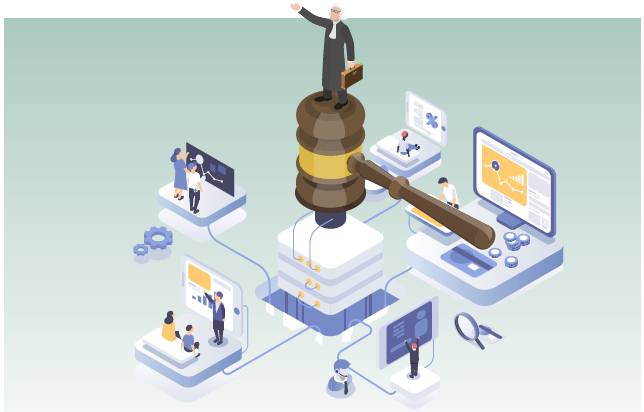 “The internet is the first thing that humanity has built that humanity doesn’t understand; the largest experiment in anarchy that we have ever had”

The world is experiencing a technological revolution that is fundamentally altering the way people work, live and interact with each other. This technological leap is being referred to as the fourth industrial revolution due to the radical changes and developments that are being experienced in social and economic spheres.

Development of these new spheres has brought with it unforeseen vices as offenders move from traditional crime to the digital landscape.

Kenya (often referred to as the Silicon Savannah) has emerged as an innovation leader in technology and digitization in Africa. Developments such as blockchain, artificial intelligence, cryptocurrency, unprecedented processing power and widespread connectivity through mobile devices have created a myriad of opportunities for innovation, employment and empowerment that were previously not available to the masses. However, development of these new spheres has brought with it unforeseen vices as offenders move from traditional crime to the digital landscape.

There is an urgent need to govern rights, interests and obligations of stakeholders in the digital spectrum in order to ensure markets run effectively and protect consumers. Legislators need to ensure that the legislation enables rather than disables innovation.

The Ministry of Information Communication and Technology released the National ICT Policy in 2016. In its foreword it states that it is meant to provide “a pro-active policy and regulatory framework that is not only in synch with contemporary technological realities and dynamics, but also expected to guide the orderly development of the ICT sector in such a way as to ensure maximum developmental impact for the benefit of all Kenyans.”

Since then, key legislations have been enacted to govern innovation and digitisation;-

This Act was enacted in 1998 but revised in 2015. It established the Communications Authority of Kenya which has the task of facilitating the development of the information and communications sector and electronic commerce. In consideration of the economic effects of digitization, this Act and its regulations for instance govern and license the marketing and promotional activities done through short codes (SMS) such as bulk SMS marketing.

The Kenya Information and Communications (Consumer protection) Regulations 2010 for instance, address consumer protection issues and require that consumers must be able to opt in and accept to receive such messages and to opt out of the services.

The unprecedented shift from traditional banking to mobile banking especially with the advent of mobile money technologies such as M-PESA, has necessitated regulation of Mobile Network Operators (MNOs). M-PESA managed to disrupt the financial market and went on to onboard a huge portion of the Kenyan population that was previously unbanked. The financial market had previously been dominated by entities that were licensed and regulated. The NPSA was therefore enacted to govern the relationship between MNO’s, consumers and the Central Bank of Kenya (CBK). The Act also sets out the licensing obligations of payment service providers and further empowers CBK to issue guidelines on emerging practises in the payment systems sector to curb money laundering activities or facilitate disclosure of suspicious transactions.

STIA established the National Innovation Agency with the sole objective of nurturing innovation. The Agency’s role was to assist young innovators with funding, mobilization of resources, connecting them with appropriate partners and intellectual property advice. It is rather questionable whether this objective has been achieved given that many innovators are not aware of the existence of the agency.

Most innovators in Kenya still use private funding, business angels, debt & equity as the most common ways of funding their start-ups. Recently, the Ministry of ICT and ICT Authority rolled out a digital white box which seeks to offer a safe space for innovators to test their products and receive mentorship. It also aids in identification of suitable ICT products that the government can procure.

With the fast rate of disruption in the financial services industry and rise of a, cashless economy, it is expected that criminal activities in the sector will revolutionise. The Act places stringent obligations on financial institutions to report to the Financial Regulatory Centre any suspicious transactional activity, especially with money laundering becoming rampant and sophisticated.

Technological innovation has proven to be a double edged sword. Cyber war, cyber security, cyber terror, cyber activism are emerging issues that have become synonymous with technology.As criminals adapt to technological advances, so must the law. The above Act was enacted on 30th May 2018 with the purpose of enabling timely and effective detection, prohibition, prevention, response, investigation and prosecution of computer and cybercrimes and to facilitate international co-operation in dealing with computer and cybercrime matters.

If properly implemented, the Act provides an extensive regime for the prevention and prosecution of cybercrimes in the country. Previous legislation was insufficient and outdated especially in relation to collection and presentation of evidence in court and international co-operation.

However, it is important to note that a host of provisions of the Act are currently suspended by an order of the High Court (Justice Mwita) in Constitutional Petition 206 of 2018 filed by the Bloggers Association of Kenya (BAKE), Article 19 and the Kenya Union of Journalists (KUJ). The basis of the case filed is that these sections infringe Article 33 of the constitution that guarantees freedom of expression.

As legislation attempts to keep pace with technology, several Bills were tabled before parliament in the year 2018. The Data Protection Bill reinforces the constitutional right to privacy (article 31) which is a key concern in a digital society where processes depend on sharing customer data. Many organizations are continuously making data driven decisions and hence the need to regulate use of this data and data subject rights.

The Financial Conduct Market Bill is also another proposed bill that was necessitated by the growth of the mobile credit lending industry. Even as financial innovation has positively contributed towards financial inclusion, the unregulated space has seen a rise in alternative lending products offered via Mobile loan applications. A recent newspaper article put the number of unregulated microlenders (majority being fintech start-ups) at 500 and these entities have disrupted commercial bank lending services. Lenders use mobile based data to guide decisions to lend. With such an influx there is a likelihood of adoption of predatory lending habits which this bill seeks to address.

Laws that need to be amended

Even as new laws are enacted to catch up with innovation, some of the existing laws need to be reviewed in order to correspond with technological developments:

The judiciary also needs to leverage on technology and innovation to disrupt the way it delivers its services. For instance, there is need to review its practice directions. Judicial courts were fitted with electronic equipment to expedite judicial processes. These were meant to replace the hand recording practise that judges used to collect evidence and testimonies. Most of the equipment remains unutilised in courtrooms and judges still record by writing. Although some courts like the Court of Appeal accept certain pleadings in soft copy (through a flash disk), there is still a requirement to present and file hard copies. The judiciary needs to wholly embrace technological disruption. The Judiciary should also consider having specialized courts to handle ICT related matters. China recently rolled out the internet court to handle internet related disputes and UAE has rolled out the Abu Dhabi Global Market Courts’ digital courtroom that will use its digital platform to conduct all its business.

Lenders use mobile based data to guide decisions to lend. With such an influx there is a likelihood of adoption of predatory lending habits which this bill seeks to address.

Investigation and prosecution of cybercrimes and banking fraud is a function of the Director of Criminal Investigations. It is therefore important for the law enforcement to keep up with the changing face of cyber crimes and invest in the necessary infrastructure.

Digitization and the “Big Four” agenda

The government has set out its agenda of improving the manufacturing sector, providing universal healthcare, creating affordable housing and food security in the country under the “Big Four” agenda.Digitization is the crux of realizing these objectives.

The Ministry of ICT has been charged with the overall responsibility of providing and maintaining any ICT infrastructure needed in any of these sectors. One of the first initiatives has been to digitize government agency functions for expedited services. This has been done in partnership with certain providers like IBM, Oracle and Microsoft.

For instance, through the E-Citizen platform the government has ensured that setting up of entities can be done online without the need of filing any documents at the government offices. This has enabled foreign investors and entrepreneurs to achieve corporate identity efficiently. The other major services on this platform include the registration of persons, application of work permits, the registration of motor vehicles and certain land transaction procedures.

The registrar of persons will be able to have precise data on Kenyan citizens and their location to enable the health provision sector map out a strategic plan on provision of healthcare. The ability to process and package medical data and share it across various government facilities such as rural dispensaries and county hospitals would enable doctors to be available for patients without traversing long distances. The information collected and maintained on land transactions by the revenue authority and the lands offices will enable the stakeholders identify areas in need of affordable housing and the uptake of financing from financial institutions.

Some Kenyan regulators seem alive to this risk and in some instances have adopted a softer approach in determining the regulatory environment such as issuing guidelines as opposed to binding regulations.

Further, to balance innovation and regulation, some regulators have rolled out regulatory sand boxes where innovators can test new products in a controlled testing environment with or without ‘regulatory relief’.

For more information on this, contact the TMT Department on fss [at] tripleoklaw.com

This post was first published in “the Above Standard”, a publication of TRIPLEOKLAW advocates, Issue 003 Dec 2018; Written by: Robert Dachi, Fiona Makaka, Janet Othero & Catherine Kariuki; Edited by Janet Othero.